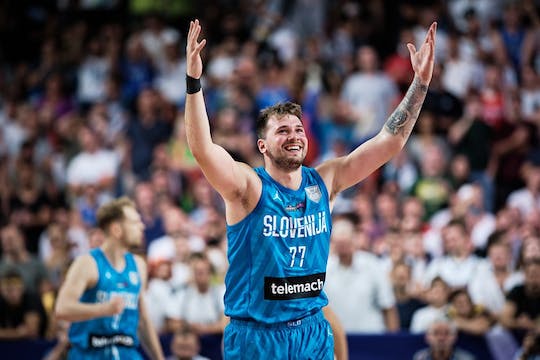 If you want to have an idea of what the basketball version of pure joy looks like, you’d probably want to check out a highlight reel of Steph Curry launching 3s as if he was playing at an arcade and not in an NBA Finals game.

A mixtape of LaMelo Ball throwing passes that don’t make sense but somehow connect is also a good reference. Fast cuts of anything Ja Morant is another.

But if you want a taste of the most current basketball version of pure joy, then it has to be this singular moment of hoop bliss from Luka Doncic.

It wasn’t one of those clutch, game-on-the-line, cardiac moments that we’re accustomed to from NBA Luka. No, this is different. FIBA Luka is different.

It happened early in a game versus Hungary, where Doncic—representing his home country of Slovenia—summed up in four parts why he’s bound to be in the top 10 greatest basketball players when he’s done.

The first part was the steal and the dash. Doncic isn’t exactly known for his lockdown defensive prowess nor his ability to pull off stops, but in that play, he got to pick up an errant pass because the ball fell right in front of him. Then he zoomed past everyone because that’s how it is with Doncic and the basketball. The hoop is a moon with gravitational pull; a Doncic bucket is a wave that’s sure to come.

The second part was the nutmeg. There is no way to describe this move other than disrespectful and dubious. There’s nothing kind about bouncing the ball between your opponent’s legs and blowing by them for a fastbreak. It has bad intention written all over it.

The third part was the lob. It was no ordinary lob. What Doncic did was look towards an open shooter in the corner but instead of doing the basic, fundamental assist, he threw it up high to an open dunker. A flawless, perfectly-timed no-look alley-oop was the result.

The fourth and final part of this instantly epic Luka Doncic play was the celebration. There was nothing fancy about it—just the classic celebratory hop that is pure joy.

How can you not watch that without a smile pasted on your face?

That’s pretty much the overall mood when thinking about the FIBA Luka experience. Forget that he scored 36 points over Germany or that he dropped 47 versus France—the second-highest scoring output in EuroBasket history.

It’s about how Doncic is doing it in every game, every possession. It’s the happiness of playing basketball, win or lose. You can’t get any purer than that.

Embodying the Storm: A tribute to Sue Bird

Sue Bird has been a legendary icon to women's basketball for over two decades.

A look back at the 2020 Bubble Lakers

It wasn’t the ideal situation but LeBron, AD, and company got the job done at the Disney Bubble in Orlando.

Why Udonis Haslem is important to the Heat

The intangibles that Udonis Haslem brings are key to the Miami Heat’s success.