Embodying the Storm: A tribute to Sue Bird

-
Lei Macaranas
The bright lights, the thumps of the dribbling ball, the cheers of the loud spectators, and the squeaky shoes running up and down the court?all of these ignite the love of Lei Macaranas for basketball. Her interest in the game started when her Dad introduced Kobe and his clutch shots to her while watching television one afternoon. She has been a fan of various sports ever since, but believes that the competitive atmosphere of the NBA remains unparalleled.

Sue Bird has been a legendary icon to women's basketball for over two decades. 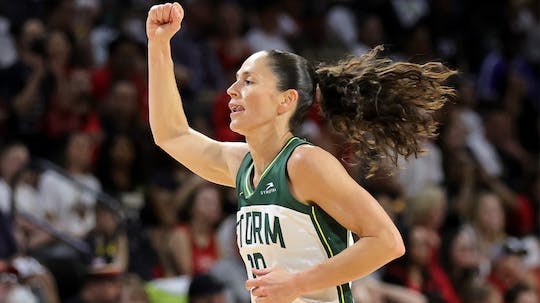 After 21 years of playing in the Women’s National Basketball Association (WNBA), Seattle Storm legend Sue Bird finally hung her jersey last Sunday at Climate Pledge Arena where she was met with a franchise-record crowd of 18,100 fans. This was her final regular season home game after announcing her retirement last June 16.

Despite losing to the Las Vegas Aces, who eliminated her team to advance to the finals, 89-81, the crowd still roared for arguably the best point guard in WNBA history. Each loud cheer in the arena that day was rightfully well-deserved?and for the right reasons.

Before being picked first overall by Seattle in the 2002 WNBA draft, Bird already showed early signs that she was going to be a Hall-of-Famer. In high school, she played for the Syosset High School but left because she wanted to up her game and play in a more competitive league. She continued her career at Christ the King Regional High School in Queens, New York, where she led her team to win the New York state championship and the national title without a single loss.

In college, Bird was sought after by numerous universities. However, she ultimately chose to play for the University of Connecticut (UConn). Despite her excitement to play for a school close to her home, Bird unfortunately suffered a torn ACL in her freshman year. She only played about eight games that year but she bounced back and led UConn to an impressive 36-1 record and a trip to the Big East Championship. In the following year, the junior stalwart did it all over again and even bagged the prestigious Naismith College Player of the Year Award.

All throughout college, she would receive accolades such as the Wade Trophy, Nancy Lieberman Award, and Honda Sports Award. By finishing first in three-point field goals and free throws, second in assists, and seventh in steals, she was named the best point guard in the country at the end of her college career.

The WNBA definitely changed when Bird entered the scene. She was a consistent starter, a member of the All-WNBA First Team, and a front-runner for Rookie of the Year upon her arrival. When Bird combined forces with Betty Lennox and Lauren Jackson to form a formidable trio in her second year, she won a title right away. She orchestrated the offense perfectly for her squad and shot the ball from the rainbow arc like it was hers to own.

During the two decades of her stint in the league, the crowds saw her clutch shots and incredible passes to teammates time and time again. Anyone who had the chance to witness her game-winning three-pointer in the 2010 Conference Finals against the defending champions Phoenix Mercury would certainly agree when I say that it feels like she hails from another world.

With countless moves that left her coaches, teammates, and fans in awe, she would later become one of the few greats to have ever achieved an NCAA title, a WNBA title, and an Olympic gold medal.

An icon and legend

Bird’s talent combined with her exceptional basketball IQ and fierce mentality made her a force to be reckoned with. However, her success on the court didn’t only win her medals and trophies?it also won her the hearts of basketball fans all over the world.

Being the most decorated player in WNBA history has paved the way for more people to recognize the talent and skills of women in hoops. She has solidified the proof that women can excel in a male-dominated sport and they can put on a show while they’re at it. Bird has gained the respect of a lot of athletes and converted herself into a role model for the youth in her community and beyond it. She has built the game from the ground up and helped establish its competitive culture that will certainly transcend for many years to come.

Many people will remember #10 as the winning face of the WNBA and a trailblazer who ushered in a new era of basketball by inspiring the up-and-coming generations of players. And the thing is, only Sue Bird has done that.

Kevin Durant teaming up with Steph Curry and the Warriors in 2016 remains one of the craziest and league-altering offseason moves in recent memory.

A look back at the 2020 Bubble Lakers

It wasn’t the ideal situation but LeBron, AD, and company got the job done at the Disney Bubble in Orlando.

Why Udonis Haslem is important to the Heat

The intangibles that Udonis Haslem brings are key to the Miami Heat’s success.